This section covers a wide range of deposits which do not fall into any of the categories previously discussed. Because these deposits are foreign particles rather than ones formed naturally during the winemaking process, they have no general characteristics. While it would be impossible to list all foreign particles that could conceivably end up in wine, examples of the more common ones are listed below:

Fibrous material is sometimes found as a deposit in bottled wine. It is usually either cellulose fibres from filter pads, or case lint present in bottles before filling. These two possibilities can be distinguished by applying the test for cellulose and the test for lignins.

This is a digital photomicrograph (40X magnification) of polyester, which was found in a bottle of wine. 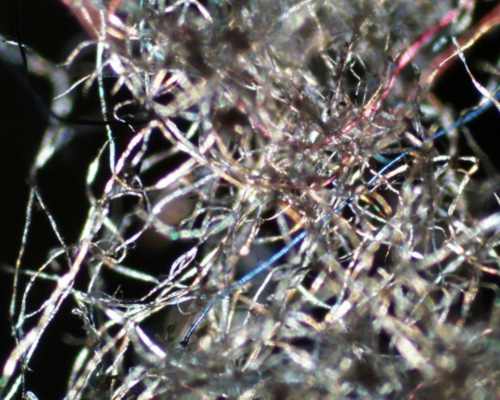 Fragments of glass are very occasionally found in bottled wine. Their origin is usually the wine bottle itself, when small fragments are chipped off during filling or corking and end up in the bottle. A deposit of glass will appear under the microscope as shard-like pieces, which could be mistaken for a crystalline deposit, but which do not show any regular crystalline structure. An IR spectrum of a suspected deposit of glass will serve to identify it unambiguously.

Amorphous silica can form an unusual deposit in wines which is caused by the phenomenon known as ‘bottle weathering’. When a glass bottle is blown, soda vapour present condenses on the inner surface of the bottle and partially reacts with the glass surface to form an alkali-rich skin. Weathering of an empty bottle occurs in humid conditions when water vapour condenses on the inside of the bottle and reacts with the alkali layer. With a low level of weathering, a sodium carbonate layer forms on the inside of the bottle and is known as a ‘bloom’, which is easily removed during bottle washing pre-filling. When there is a large amount of water present during storage, this bloom is washed away leaving a silicon-rich layer which subsequently can lead to the formation of needle or scroll-like amorphous silica structures in wine (see picture).

The IR spectrum of these needles is very similar to that of glass. Whilst the needles have been reported as ‘harmless’ in the medical literature, they are visually unacceptable. If bottle weathering is suspected, the test for weathered glass described below can be used.

Cork dust is a relatively common deposit found in bottled wine. Tiny fragments of cork are produced during cork processing, and some will adhere to finished corks. These fragments can then leach into wine when the corks are used. Cork dust isolated from a wine will appear as light brown to gold-coloured particles which show cellular structure at high magnification. If a cork dust deposit is suspected it can be confirmed using IR spectrometry or using the test for lignin (one of the major components of cork) described below.

Cork coating material can also be found as a deposit in bottled wine. This material is usually made up of paraffins, silicons or mixtures of the two. These coatings have several purposes: to reduce friction, increasing bottling speed, to restore the cork’s impermeability which can be affected by processes such as heating and bleaching, and to assist with ease of cork extraction. If too much coating material is present, or if it is distributed unevenly on the corks, fragments can be dislodged during corking and end up in the bottle. A deposit of cork coating material usually appears white and waxy. Under the microscope it appears amorphous. Its presence can be confirmed by IR spectroscopy. A spot test for paraffin-based coatings is described below.

Fining agents such as isinglass, gelatine and casein are sometimes not completely removed from wine and can end up as hazes or deposits. These compounds are proteins and therefore appear as amorphous deposits which give a positive Nigrosine test. Such deposits can only be distinguished from wine protein deposits by use of a gel electrophoresis technique which isolates individual protein fractions within a sample and can give an estimate of their molecular weights. Other non-protein fining agents such as bentonite are also occasionally found as deposits in wine.

Auger beetles can be found in barrel storage areas of wineries where they have been known to bore holes, some as big as matchsticks, in oak barrels. This particular insect was found to be a Cylindrical Auger Beetle, Xylion cylindricus (Macleay) (order Coleoptera, family Bostrichidae).

“Most bostrichids bore into moribund or freshly felled trees, dead and dry sapwood, or other kinds of dry plant material containing starches and sugars. Xylion cylindricus is an Australian native species but according to our database, is unknown to the South Australian area.” See: CSIRO’s insect web site.

For information on control options for the insect, the CSIRO suggests contacting your local government department or the South Australian Research and Development Institute (SARDI). 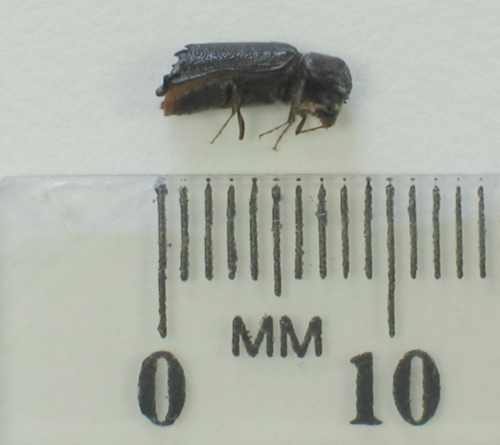 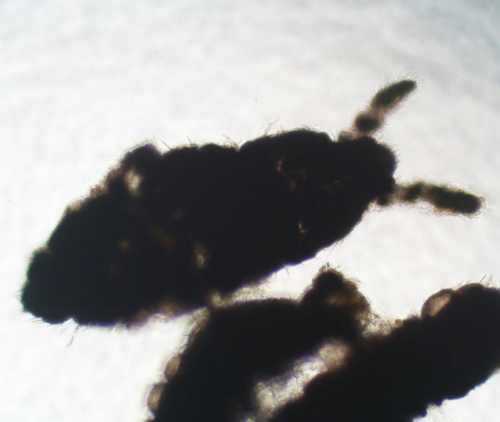